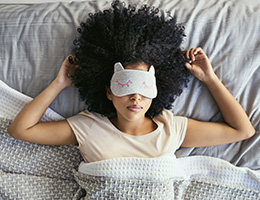 If you’re like many Americans who don’t get enough sleep during the week, you may try to catch up on your shut-eye during the weekend. But a new study shows that this habit doesn’t help—and it may even hurt your health.

The truth about sleep deficits

Adults need at least seven hours of sleep a night, but about a third of them regularly get less. People sometimes try to make up for not getting enough shut-eye by sleeping in on their days off work.

Researchers wanted to find out if this strategy helped reduce the health risks of being sleep-deprived during the week. Over time, a lack of adequate sleep can disrupt metabolism, which raises the risk for gaining weight and developing diabetes.

The new study, published in Current Biology, looked at the eating patterns, weight gain and changes in insulin sensitivity of three groups of healthy adults. One group got normal sleep; one was sleep-deprived (only up to five hours of sleep a night); and the third group was sleep-deprived, but could sleep in for two days of the study.

According to the researchers, the take-home message from the study is that weekend recovery, or catch-up sleep, doesn’t appear to help counteract the health risks of not getting enough sleep during the week.

Could you benefit from a sleep study?

If you’re having trouble getting enough sleep and you often feel tired during the day, you may be a good candidate for a sleep study. Take our sleep assessment test and share the results with your doctor.