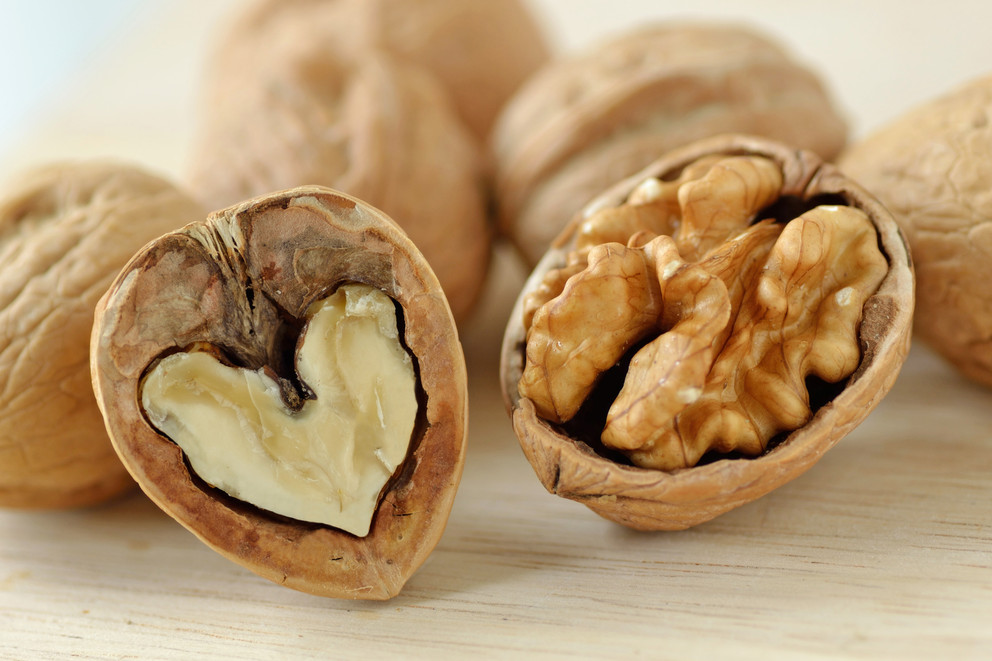 When combined with a diet low in saturated fats, eating walnuts may help lower blood pressure in people at risk for cardiovascular disease, according to a new Penn State study.

In a randomized, controlled trial, researchers examined the effects of replacing some of the saturated fats in participants’ diets with walnuts. They found that when participants ate whole walnuts daily in combination with lower overall amounts of saturated fat, they had lower central blood pressure.

According to the researchers, central pressure is the pressure that is exerted on organs like the heart. This measure, like blood pressure measured in the arm the traditional way, provides information about a person’s risk of developing cardiovascular disease (CVD).

Penny Kris-Etherton, distinguished professor of nutrition at Penn State, said the study suggests that because walnuts lowered central pressure, the participants’ risk of CVD may also have decreased.

“When participants ate whole walnuts, they saw greater benefits than when they consumed a diet with a similar fatty acid profile as walnuts without eating the nut itself,” Kris-Etherton said. “So it seems like there’s a little something extra in walnuts that are beneficial — maybe their bioactive compounds, maybe the fiber, maybe something else — that you don’t get in the fatty acids alone.”

Alyssa Tindall, recent student in Kris-Etherton’s lab and a new doctoral graduate in nutrition, said the study was one of the first to try to uncover which parts of the walnuts help support heart health.

“Walnuts contain alpha-linolenic acid — ALA — a plant-based omega-3 that may positively affect blood pressure,” Tindall said. “We wanted to see if ALA was the major contributor to these heart-healthy benefits, or if it was other bioactive component of walnuts, like polyphenols. We designed the study to test if these components had additive benefits.”

For the study, the researchers recruited 45 participants with overweight or obesity who were between the ages of 30 and 65. Before the study began, participants were placed on a “run-in” diet for two weeks.

“Putting everyone on the same diet for two weeks prior to the start of the study helped put everyone on the same starting plane,” Tindall said. “The run-in diet included 12 percent of their calories from saturated fat, which mimics an average American diet. This way, when the participants started on the study diets, we knew for sure that the walnuts or other oils replaced saturated fats.”

After the run-in diet, the participants were randomly assigned to one of three study diets, all of which included less saturated fat than the run-in diet. The diets included one that incorporated whole walnuts, one that included the same amount of ALA and polyunsaturated fatty acids without walnuts, and one that partially substituted oleic acid (another fatty acid) for the same amount of ALA found in walnuts, without any walnuts.

All three diets substituted walnuts or vegetable oils for five percent of the saturated fat content of the run-in diet, and all participants followed each diet for six weeks, with a break between diet periods.

The researchers found that while all treatment diets had a positive effect on cardiovascular outcomes, the diet with whole walnuts provided the greatest benefits, including lower central diastolic blood pressure. In contrast to brachial pressure — which is the pressure moving away from your heart and measured with an arm cuff in the doctor’s office — central pressure is the pressure moving toward your heart.

Tindall said that the results — recently published in the Journal of the American Heart Association — underline the importance of replacing saturated fat with healthier alternatives.

Kris-Etherton added that the study supports including walnuts as part of a heart-healthy diet.

“Instead of reaching for fatty red meat or full-fat dairy products for a snack, consider having some skim milk and walnuts,” Kris-Etherton said. “I think it boils down to how we can get the most out of the food we’re eating, specifically, ‘how to get a little more bang out of your food buck.’ In that respect, walnuts are a good substitute for saturated fat.”