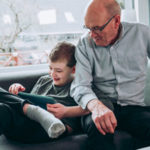 Grandparents spoiling their grandchildren is a time-honored tradition. But how they indulge the kids may be changing. Instead of saying yes to late bedtimes or dessert before dinner, they’re giving in to too much screen time, a new study by the Journal of Children and Media suggests.

It looked at the amount of screen time—on phones, tablets, computers or TVs—allowed by grandparents who watched grandchildren ages 2 to 7 at least once a week. It found that during an average four-hour visit, the children spent a full two hours either watching videos or playing games on electronic devices.

Too much screen time can crowd out activities that help kids thrive. Among them: family time, face-to-face interactions, outdoor playtime and sleep.

The study also found that:

The researchers offer this advice for parents: Supply grandparents with plenty of books and toys to help them keep kids busy without screens.

And they strongly encourage grandparents to keep their grandchildren’s well-being in mind and limit screen time. Here’s what the American Academy of Pediatrics (AAP) recommends: