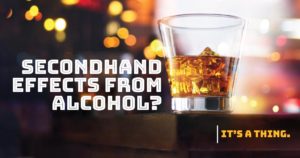 Just as tobacco smoke can hurt a nonsmoker’s health, the secondhand effects of alcohol use—such as being harassed by someone who’s had too much to drink or being injured by a drunk driver—often harm those other than the drinker, a new study finds.

It found that each year, 1 in 5 adults is harmed in some way because of someone else’s drinking.

The researchers looked at U.S. national survey data from 8,750 adults. According to this analysis, an estimated 53 million people each year are harmed by other people’s drinking. These problems can include:

Sources of harm also tended to differ by gender, the researchers found. Women were often harmed by a male in their own home who drank heavily. For men, the risk often came from someone outside the family.

Other key findings from the study included:

The study was published in the Journal of Studies on Alcohol and Drugs.

When it’s too much

Besides risky behaviors and personal problems, unhealthy drinking patterns are linked to a number of health conditions, including cancer, liver disease and heart problems. Learn more about the dangers of excessive drinking.

Worried you have a drinking problem? Take this four-question assessment. Be sure to share any concerns with your healthcare provider.