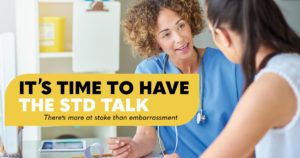 The combined number of people who have syphilis, gonorrhea or chlamydia in the U.S. hit an all-time high last year, a new report from the Centers for Disease Control and Prevention (CDC) shows.

Nearly 2.5 million cases of these infections were reported in 2018. That’s a jump of more than 100,000 since the previous year.

And it might not end there, experts say. That’s because sexually transmitted diseases (STDs) don’t always cause symptoms and often aren’t diagnosed.

That can have tragic consequences. The report found a concerning rise in newborn deaths caused by congenital syphilis. This occurs when a mother with syphilis passes it on to her baby during pregnancy.

When babies survive it, congenital syphilis can lead to lifelong physical and neurological problems.

Syphilis, gonorrhea and chlamydia are the three most commonly reported STDs in the U.S. They all can be cured with antibiotics.

But left untreated, they can cause serious health problems, such as:

This is the fifth straight year the number of all three STDs has risen. Several factors may be at play, CDC reported. A key one: a decrease in condom use among young people.

Drug use, poverty and the stigma surrounding STDs may also reduce access to STD prevention and care. And so may cuts to STD screening and treatment programs at the state and local levels.

To help prevent the spread of STDs, CDC recommends talking openly about them, getting tested regularly, using condoms and practicing mutual monogamy.

To learn more, check out the full report.

This rise in newborn deaths is especially troubling since each one is preventable. Early prenatal care and STD testing can help protect babies from the dangers of syphilis.

CDC advises syphilis testing for all pregnant women at their first prenatal visit. Some women may need to be tested again. If a test is positive, treatment with antibiotics should start right away.

Talking about a sensitive topic like STDs may not be easy. But awkward or not, it’s crucial to ask your doctor how to stay safe—and if you should be tested. Find out how to get the conversation rolling.